For assessment 1 of the module we had to record, mix and master a band recording lasting between 2-6 minutes. The required instruments for the piece were;

Mics from Left to Right –

For the drums we used a 6 mic set-up, experimenting with both an intuitive mic placement with no real working out, as well as utilizing the “Glyn Johns” technique creating a triangle of microphones, equally spaced from the snare drum to avoid phase issues using a length of cable to keep the measurements consistent.

Over all the Glyn Johns technique seemed to have a better sound for whatever reason so we decided to stick with it in the second half of the recording session.

We also made some modifications to the drum kit and it’s positioning, by removing the front head of the kick drum as it was creating an undesirable “slapping” type of tone, once we removed it and rearranged the padding inside it became a bit more beefy and “bassy”. We also moved the drum kit from outside of the drum room, pointing the kick towards the small room it had initially been in, in order to create a sort of acoustic tunnel or chamber, within which we placed an ambient mic to pick up the sound from the other room. This helped give it a bit more of a natural “in the room” type of sound.

As for post-production, I arranged the levels accordingly to taste so that everything could be heard, then applied some reverb to give some life back to it, I also used some compression to add a bit of punch, as well as using a copy of the original track, and compressing and boosting it hugely, but pulling the levels right down so that it just adds a little bit of punch to the original recording. Boosting a lot of the low and low-mid frequencies, while putting a filter envelope to cut much of the high frequencies.

As with all the instruments and parts the drum’s were entirely improvised, with no click track or metronome, also in an unusual method, the drums were recorded before anything else, with everything else added afterwards via improvising to the original drum track. This method has been used in the past (albeit very rarely) by a couple of guitarists/drummers such as Alex Machacek and Marco Minnemann (24 Tales) and Alex Machacek and Terry Bozio ([Sic]).

For me easiest part (interms of actual recording processes and set-up involved.) As an avid digital guitar gear advocate I purchased a Fractal Audio AXE FX II last year, which is basically the unit that has brought digital guitar tones to the level were it is indistiguishable from it’s analogue or tube counter-parts, using complex algorithms and digital recreations of circuitry and components.

All I have to do to record guitar or bass, is plug my AXE FX II into a PC using USB (or into an already existing interface using 2 XLR’s or 1/4″ jack) and using my tones I have already created and am always creating, I am able to get a pristine tone without having to deal with mic placements etc. (There are also emulations of different mics and cabinets which can be tweaked and mixed together in different combinations.) 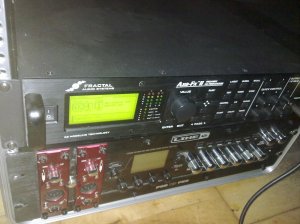 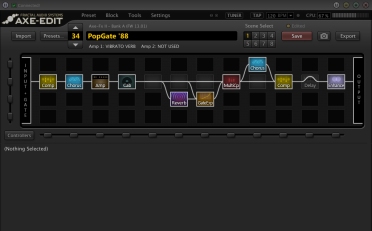 The main tone that I was using is based on that super-tight 80’s gated type of clean, which utilized with my 1986 MIJ Fender Strat, provides a very “spanky” and percussive type of tone, reminiscant of 80s/90s Peter Gabriel and Michael Jackson, among many others.

I also used another tone I created which doubles as a nice warm vintage sounding clean, but when switched to it’s 2nd setting (called scenes in AXE FX) I have assigned 2 separate distortion pedals, which give it a nice small amount of bite and gain to bring it into lead playing territory.  Unfortunately my strat is in a rather sorry state of disrepair which 20 year old worn out frets, and the bridge slipping off it’s post when the whammy bar is used too much, this all affects the sustain, and a lot of issues with bending notes fretting out and becoming “dead notes”, I have to adjust my style accordingly when playing this guitar.

On this recording a double tracked about 80% of the riffs, hard panning them far left and right. In the background there are some swelled ambient chords using the volume-knob on the guitar, only a single track recorded for this and the guitar solo. 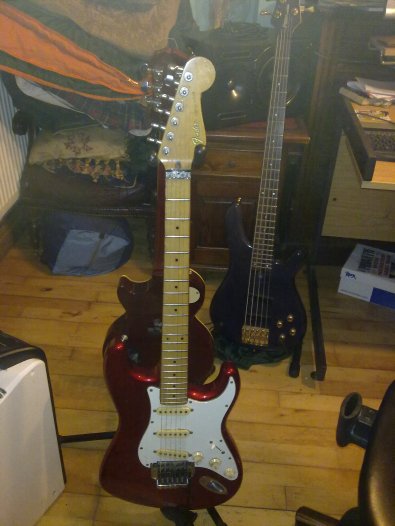 For bass guitar, I used the exact same process of using the AXE FX II (with a custom bass preset I’ve made) and improvising over the drum and guitar tracks, the bass itself is a Fernandes APB 5-string bass. All 1 track, in post-production I added some light compression, and boosted some of the low frequencies while cutting a lot of the mid frequencies so that it didn’t interfere too much with the guitar tone. 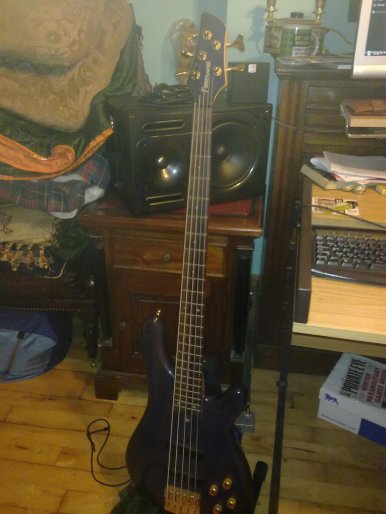 There are some subtle synth pads later on in the song during the guitar solo, I used the software “Omnisphere” for the string sounds, and “Reason 5” for the synth pad. I tracked these chords using my YRG-1000 MIDI guitar, which enables me to play MIDI parts while retaining my knowledge of the guitar, instead of having to learn piano (although you can’t beat a keyboard for many types of instruments, the guitar works well for single-line melodic instruments such as flutes and violins, and for sustained chordal work). 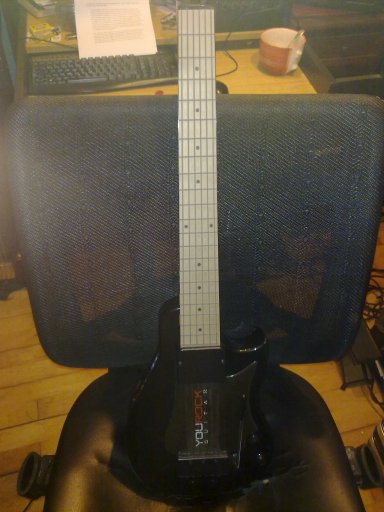 Here I used my ZOOM Q3 HD as the recording studio was being used, the sound from the 2 x/y stereo microphones is not bad, if lacking a bit of warmth and body, but I decided I should be able to help boost these frequencies back up in the mixing stage with a bit of EQ and compression.

The sound quality was absolutely fine in the end, and with a little reverb, EQ and compression it sounded fairly nice, although I did not think the music really needed any piano (not any of my poor piano playing anyway haha), but I think it works very nicely at the end of the tune, with the ambient synth strings in the background, a very calming and ethereal sort of combination of sounds which reminds me a little of the new “Cosmos” TV show remake’s title theme.

For my reference tracks, I choose some more old school Progressive Rock and Jazz-Fusion stuff rather than the ultra-pristine production of today’s fusion and prog rock which for me as an novice to recording and mixing is pretty unattainable.

Then Jeff Beck’s “Two Rivers” off his famous album “Guitar Shop” (considered by many to be one of the best produced albums in history, alongside record such as Peter Gabriel’s “So”.)

Then finally the track “Slink” by pianist Lyle Mays, known best for his work with the Pat Metheny Group.

With this task, I just used my ZOOM Q3 HD camera, which has a couple of mini X/Y stereo mics built into it, not incredible, but they have a clean and neutral sound which did the job on short notice and being unable to book out the studio control room at the time to use the proper mics + preamps/interface. 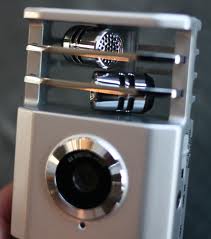 I played a very similar piano part, trying to keep the dynamics and such as similar as possible each time, and moved the mic around to 3 different positions.